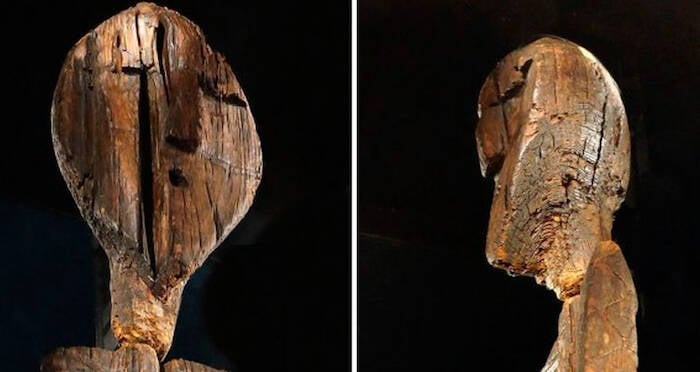 Sverdlovsk Regional MuseumA reconstruction of the Shigir Idol from 1894.

In 1890, Russian miners happened upon what’s now known as the Shigir Idol. A 12,500-year-old totem pole, this invaluable artifact is the oldest wooden sculpture ever found and the first known piece of ritual art in human history.

Now, after more than a century, scientists have begun to unlock the secrets of this mysterious idol and just how old it actually is.

Getty ImagesThe mask is believed to have been worn by priests during some sort of religious ritual.

Archaeologists digging at Sanxingdui in China’s Sichuan province struck gold — literally — when they uncovered the fragments of a 3,000-year-old gold mask.

The mask weighs a little over half a pound and is 84 percent pure gold. Found among a substantial cache of 500 objects spread across six “sacrificial pits,” archaeologists suspect that this mask was worn by a priest in a religious ceremony.

Dig deeper in this report.

Archaeological treasures are usually discovered by digging deep into the earth. One Polish archaeologist, however, made an incredible discovery from the sky — and now he has unearthed a 5,000-year-old cemetery and a medieval fortress.

Jan Bulas, an independent archaeologist in Kraków, became intrigued after noticing straight lines on satellite images of a farm near the town of Dębiany — lines only visible from above. He went to investigate with fellow archaeologist Marcin Przybyła.

There, the pair made an astounding find: the sprawling cemetery, consisting of 12, roughly 150-foot tombs — and atop the cemetery, remains of a medieval fortress, complete with a moat.