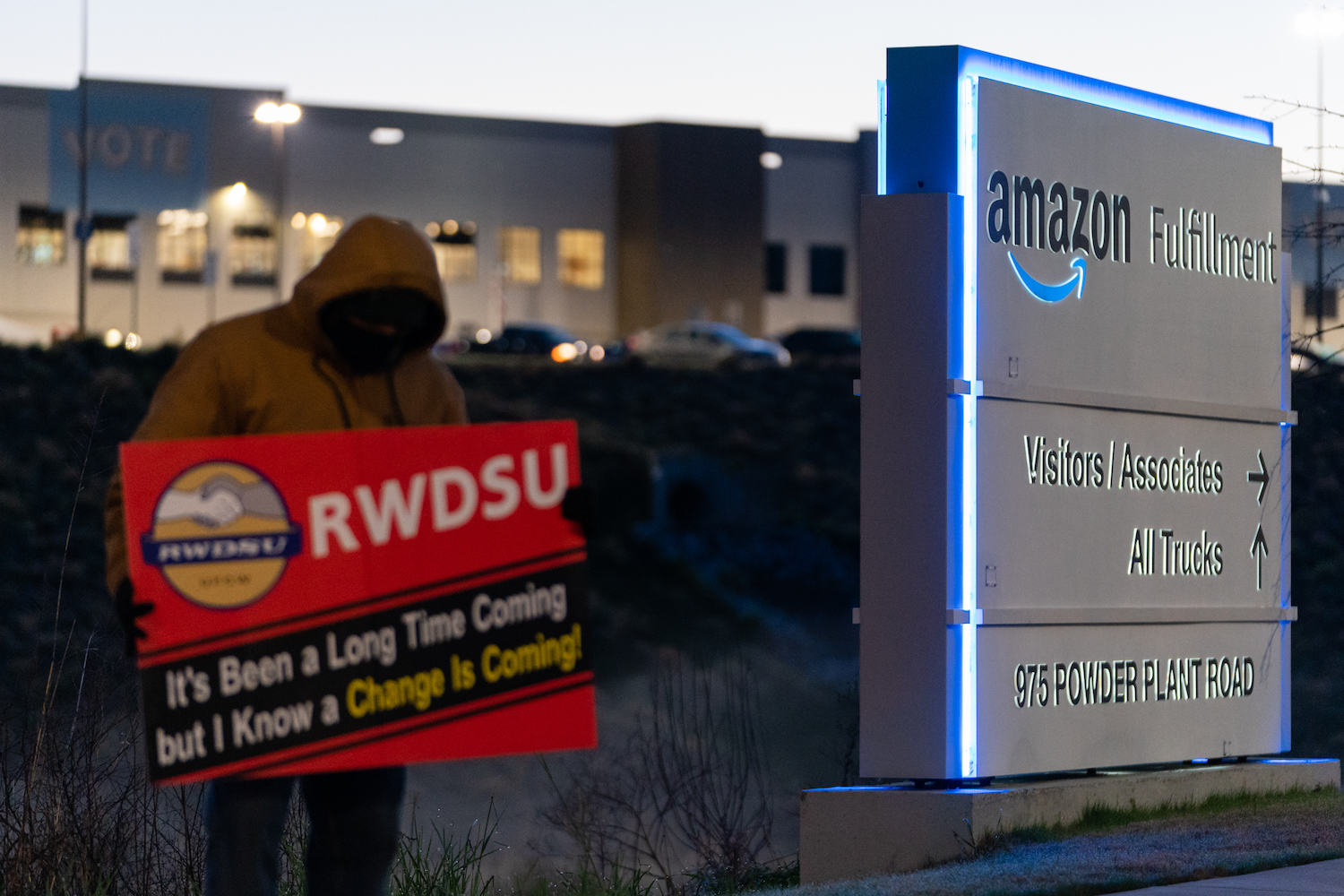 Have tips or feedback? Hit reply to this email to let me know your thoughts.

Ballot counting begins today in a landmark union drive at Amazon, the second largest U.S. employer and the world’s fourth most valuable company. The campaign is small in scale but—judging by the company’s fierce pushback—highly significant, as workers in Amazon’s Bessemer, Alabama, facility decide on whether to form a union.

Amazon’s executives argue a union is unnecessary, citing the company’s $15.30 per hour entry wages and health insurance benefits. The workers behind the union push have dismissed the company talk, and have spoken out against grueling work shifts, relentless employee tracking, as well as safety concerns related to COVID-19.

Despite its anti-union stance, Amazon has room to be generous amid a coronavirus-fueled boom in sales: Profits were up 84 percent last year, and the company’s founder, Jeff Bezos, saw his personal wealth balloon grow by $72 billion in 2020.

District of Amazon. In fighting back against the union, Amazon does not just have U.S. labor laws in its favor. Amazon spent the second most on U.S. government lobbying of any single company in the United States in 2020, beaten only by Facebook. Its head of public relations, Jay Carney, was White House press secretary for President Barack Obama as well as a communications director for then-Vice President Biden. It’s also planning a permanent foothold in the Washington area by establishing a “second headquarters” across the Potomac River in Arlington, Virginia.

So it was all the more eyebrow raising when U.S. President Joe Biden came out in support of the union drive, in a video in which he did not name Amazon but referenced “workers in Alabama” and called on workers to “make your voice heard” while admonishing union-busting tactics. “Let me be clear: It’s not up to me to decide whether anyone should join a union,” Biden said. “But let me be even more clear: It’s not up to an employer to decide that either.”

A glimpse into the future? In working to defeat the push, Amazon is hoping to avoid opening up another front in its battle with workers. Much of Amazon’s workforce in Europe, unbound by strict U.S. requirements, already has union representation and has made its presence felt over the course of the pandemic. Workers in France helped bring the company’s warehouse operations to a halt over safety concerns last March, and in July secured a pay raise.

Last week in Italy, Amazon workers joined with third-party delivery providers in a 24-hour strike over working conditions. This week, Verdi, the union representing Amazon’s German warehouse workers called for a four-day strike between Monday and Thursday to pressure the company to commit to a collective bargaining agreement observed by the German retail and mail order sector.

Results of the Alabama vote are likely later in the week, with a victory for union organizers expected to inspire a surge of Amazon union drives across the United States. Meanwhile, the company’s workers have already begun organizing globally: Amazon Workers International (AWI), formed in 2015, is working on expanding to Asia and Latin America.

Terror in Mozambique. Thousands are missing and an unknown number are dead following an attack on Palma, a strategically important town home to a facility owned by oil and gas giant Total. The Islamic State claimed responsibility for the attack, which led to the group taking over banks and government offices. The taking of Palma follows a similar assault in August, when militants seized the port of Mocímboa da Praia, 50 miles south of Palma.

U.S. cases rise. Rochelle Walensky, the new head of the U.S. Centers for Disease Control and Prevention relayed her feeling of “impending doom” at a White House briefing on Monday, as the number of new daily COVID-19 cases continue to increase in the United States. After weeks of a steady decline, the past week has seen new cases increase by 16 percent. President Biden has urged states to reinstate mask mandates in order to halt the spread of the virus.

A pandemic treaty? World leaders have called for an international treaty to cover preparedness and response to future pandemics in a joint statement published on Monday.

The statement, which includes the World Health Organization chief Tedros Adhanom Ghebreyesus as a signatory, called for an “all-of-government and all-of-society” approach to dealing with future pandemics, which would include cooperation on “alert systems, data-sharing, research, and local, regional and global production and distribution of medical and public health counter measures, such as vaccines, medicines, diagnostics and personal protective equipment.” Although German Chancellor Angela Merkel and British Prime Minister Boris Johnson signed on to the statement, there was no representation from China, the United States, or Russia.

Iran talks. The Biden administration plans to jump-start talks with Iran as soon as this week, Politico reports, with a proposal to reduce economic sanctions in return for Tehran’s agreement to stop some of its nuclear activities. The news comes as Biden administration officials face a closing window for negotiations ahead of Iran’s presidential elections in June.

An Italian gangster has been arrested following seven years on the run after he was betrayed by his own cooking videos. Police say they tracked down Marc Feren Claude Biart in the Dominican Republic after noticing Biart’s tattoos in culinary videos he had uploaded to YouTube (he had at least been careful enough to hide his face). Biart had been wanted by police for allegedly smuggling cocaine into the Netherlands on behalf of the ‘Ndrangheta mafia, a group that controls the majority of the drug’s flow into Europe.

It’s not clear how the police stumbled upon Biart’s YouTube videos, although it’s possible they were tipped off: Hundreds of alleged members of the ‘Ndrangheta mafia are currently facing trial in Italy for murder, drug trafficking, extortion and money laundering.

That’s it for today.

For more from FP, visit foreignpolicy.com, subscribe here, or sign up for our other newsletters. If you have tips, comments, questions, or corrections you can reply to this email.